Are you a humanist?

The British Humanist Association has assembled this short list of questions for you to discover how closely your own beliefs are consistent with humanist beliefs. Take the test now! 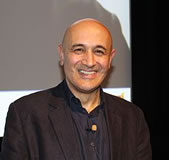